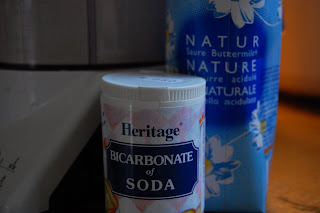 After recently discovering how easy Soda Bread is to make, I decided this morning to attempt to make Soda Bread Rolls.

Not out of any Domestic Goddess tendancies, but MrT had left to go to the Geneva Autosalon and I had forgotten to ask him to get bread before he left with the car. It being cold, and me being too lazy, a walk to the bakers was out of the question. But I was hungry and it is Saturday so I wanted a Decent Breakfast, not just cereal.

Baking bread is time consuming but as I recently discovered, Soda Bread is pretty quick as there is no yeast to be patiently awaited on rising.

My favourite Soda Bread recipe, cobbled together from several sources and adapted to suit what the store cupboard offers is incredibly easy. 450g flour (half/half plain and wholemeal), a tsp of sugar, a tsp of sea salt, a tsp of Baking Soda and as much buttermilk as needed to form a dough, around 270ml I think.

Preheat oven, put ovenproof pot into oven to heat up, bung all the dry ingredients into a food processor, whizz around then add the buttermilk. Speed is now the essence, as the buttermilk reacts with the Baking Soda.

Normally at this point I form a flat round loaf and place it into the floured pot. This time I made dainty little rolls 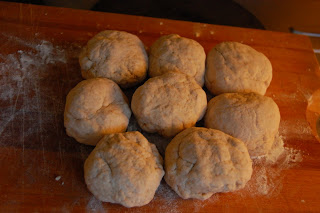 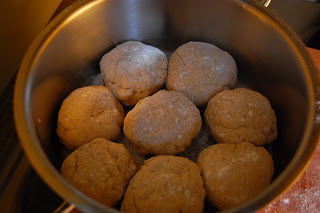 Place the rolls into the pot and put the lid on. Into the oven they go, for around 35 mins. I have been told by an Irishwoman than when the soda bread sings to you, it is ready.

Scottish made soda bread is obviously as tone deaf as their maker, as there was no singing coming from these little suckers, but they did smell heavenly. 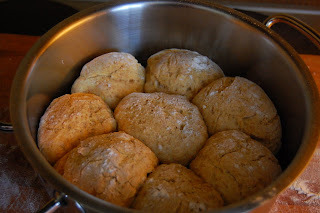 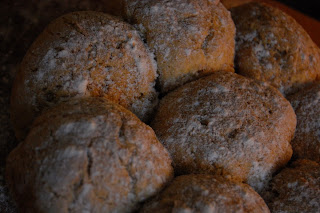 As you can see, they turned out pretty good and they tasted as good as they smelled. All in all the preparations took me about 5 mins, added to that the heating of oven and cooking they are ready to eat in about 45 mins.

That is about the time it takes me to look halfway respectable in the morning.