Are you using Social Media in Business effectively?

‘You need to be on Twitter and Facebook. You need a blog. Everyone does Social Media now’

If you have heard any of these kind of comments, you would be forgiven for thinking that it is really easy – set up a Twitter or Facebook account, do a bit of blogging, and you will see profits soar.

Well, it can be simple, but there are a few things that make a Social Media strategy more likely to succeed.

Interestingly, it is not always the big names who do this well. The companies, or brands, who do this successfully follow a few basic rules, I have observed:

1. Don’t do it half-heartedly.
If you are going to use Twitter, then use it. Don’t say to the office junior, “You are young, sure to have your “finger on the pulse” of what young folk want. You can do the Twitter account”. This is not a job for someone who does not know your product, or your brand. Or does not have the time to dedicate a couple of hours a day to it. Ideally they should be able to check constantly so that they can respond to queries and comments.

An example of doing it half-heartedly is Oven Pride – I blogged about the product a week or so ago. And tweeted a link @oven-pride. No response. Nothing. And look at their Twitter feed – barely any followers, and only 7 tweets.

Marks and Spencers have shaken off their fuddy-duddy image and are showing others how this is done. This week I posted this response to M&S 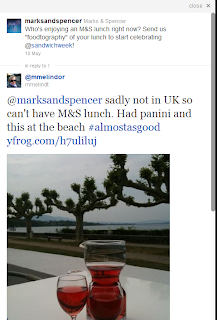 This was their reply

3. Post regularly
One of my favourite jewellery designers Monica Vinader posts a couple of times a day; enough to stay interesting but not too often to start to annoy followers. If I look at your Twitter feed and see that the last post was two weeks ago, then I am unlikely to follow you.

It is boring to follow someone who doesn’t reply. This also goes for slebs, most of whom don’t bother to reply to tweets. Ok, they are followed by thousands but an occasional RT or reply would not go amiss. The same applies to companies – if your customers speak to you, then answer. And follow some of those following you. Writers are not companies, or brands, but they are trying to sell us something – their books. Some writers, such as Jill Mansell,  Katie Fforde  reply to their readers, using Twitter as it is intended to be used – as an interactive tool.

Have a constant search set up so that whenever a customer mentions your company or product, you can respond to it. This can be a consumer complaining about your product, to which you should take the time to get in touch and try to sort out the problem. Or it could be a compliment, which you can RT to your followers.
Don’t however do as Asda do – and only react to a customer complaint when the customer creates a Social Media storm – I have seen two instances in the past 6 months where customers have been left with no groceries, and no refund of payment after a computer glitch in Asda’s systems meant that a home shopping delivery was cancelled. Only when the customer posted on Mumsnet, and the thread was subsequently posted on Twitter was the issue resolved.
6. Have a ‘Disaster Plan’ Ready
Social Media is not predictable, and neither is life. Be ready to respond to negative comments. If you make a mistake apologise and move on. KitchenAid showed how to respond to potentially damaging mistake by the person manning their Twitter feed. Posting from the corporate account rather than his/her private account, during the presidential debate, the hapless Social Media ‘expert’ attracted the wrong kind of attention

”Obamas gma even knew it was going 2 b bad! ‘She died 3 days b4 he came president’. #nbcpolitics”

The response from KitchenAid was swift, and showed their understanding of the use of Social Media.

Deepest apologies for an irresponsible tweet that is in no way a representation of the brand’s opinion. #nbcpolitics

Using Social Media to promote your business can backfire, as Microsoft discovered to their horror when they promised to donate a $1 to the Japan quake fund for every RT of their Tweet from their search engine Bing’s twitter account. They later apologised and promised to donate $100k to the Japanese earthquake fund. Think carefully about what you put out there, and dialling it back can be costly, both for your company’s image and for the profits.

Old Spice showed how to do it well.

The campaign with actor Isaiah Mustafa was incredibly successful when it went ‘viral’ on Twitter and Facebook, and it helped update the brand.

What companies do you follow and which ones have you swiftly unfollowed, and why?