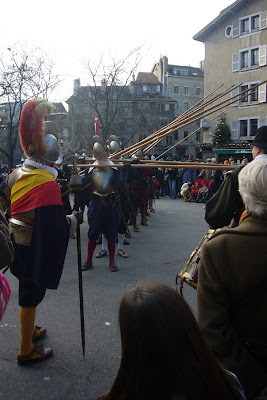 Geneva celebrates the Escalade each December to commemorate the defeat of the troops sent by Charles Emmanuel I, Duke of Savoy in the night of 11/12 December 1602.

During that fateful night the Genevoise were alerted to the troops gathering just outside the city walls and fought alongside the town militia.

Legend has it that Mére Royaume, a mother of 14 children grabbed the cauldron of soup that she was making at the time and poured it out of the window, killing one of the attackers.

To celebrate Mére Royaume, the Genevoise now smash a chocolate pot, or Marmite, that is filled with marzipan vegetables, while reciting “Ainsi périssent les ennemis de la République! ” (Thus perish the enemies of the Republic).