I started this a while ago and never went back to it. Hmm. I quite like it and think I will carry on. What do you think? 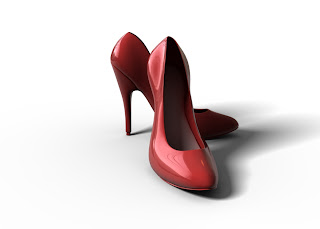 Dora opened the door of her apartment. Tilting her head she listened to the sound of Ravelâ€™s Bolero filling the small space. Finlay must have come home early from work, just as she had. She should be happy that they had an unexpected afternoon, but she had a lot of thinking to do and wanted to have some time alone to do it.
That afternoon she had been offered a new job. A great new job, furthering her career, it was exactly the position that she had been waiting for. With one tiny little catch â€“ it was not in London. She knew she should jump at the chance to go to Geneva, but she was happy where she was. Why would she want to move away from all her friends and family, from her cosy little flat in Greenwich, from Finlay? Frowning, she hung up her coat, took off her shoes and put them in the shoe cupboard, automatically reaching down to put away Finlayâ€™s shoes and jacket.
She stared at the second pair of shoes next to Finlayâ€™s scuffed Converse boots. Red high heels. Not her red high heels. Where did they come from?
With a mounting sense of dread she walked through the apartment, the dadadaduuuum of Bolero booming in her ears. The music rose to a crescendo as she opened the door of her bedroom. There on her bed â€“ the bed that she bought from her very first wage packet â€“ the bed that she had shared with Finlay for the past two years â€“ was Finlay. And the red shoes lady. He was shagging another woman. In her bed. To Bolero. Was there another clichÃ© left unturned? Could he be more bloody predictable.
â€œWhat the FUCK are you doing?â€, she screamed, even as she realised what a stupid question that was. It was pretty obvious what they were doing â€“ he was thrusting in time to the music, for Godâ€™s sake.
Stalking over to the armoire, she plucked his iPhone out of the docking station, cutting Ravel off. In the silence that followed, two shocked faces turned towards her. â€œFuck. Fuck. Dora. It is not what it looks likeâ€, he stammered.
His blonde hair falling down over her forehead, in that preppy way that she always found adorable, Finlay reached for her. Dora snorted, â€œIt bloody well is what it looks like. You are shagging another woman in my bedâ€, she looked closer at the woman. â€œDo I know you?â€.
MsRedHighHeels was recovering her poise remarkable quickly, she must have been in this position before, Dora mused cattily. â€œWe met at Finnâ€™s Christmas party last week. I am the executive secretary, Serenaâ€.
â€œRight, get out. Both of you. Finlay, you can come back tomorrow to pick up your things. I donâ€™t want to see you againâ€.
Turning on her heel, she stormed out of the bedroom, pausing only to drop Finlayâ€™s beloved iPhone into the glass of beer that was still sitting next to the sofa from last night. He sprang out of bed, vaulted across the sofa to rescue his phone in the most energetic display that she had seen in months.
â€œYou BITCHâ€, he howled. She gazed at him, naked except for a pair of white tennis socks, a dripping iPhone in his hand and smiled, â€œI am going to Starbucks for a coffee. I will be back in 30 minutes. You and your floozy had better be gone by thenâ€.
â€œFloozy? You didnâ€™t really call her a floozy, did youâ€, Doraâ€™s best friend struggled with laughter.
â€œI did. It suited her. You should have seen the red high heels, Alex. Bloody wicked witch of the West. It is all right, you can laugh.â€
â€œSorry, I know it is not funny but the thought of him playing the sophisticated seducer â€“ why on earth was he playing Bolero?â€
â€œIt is the only classical music on his iPhone â€“ think it was on a compilation of 50 Best TV Sports Moments or something. He liked to play it when we… well, you knowâ€, Dora admitted.
Alex lost it. She laughed until tears ran down her face. After a moment, Dora joined in. It took some time until she was composed enough to say, â€œI know it is awful, but he said that it made him feel like James Bondâ€, which set them off again.
After several minutes of uncontrollable laughter, Dora took a deep breath, trying to stop sniggering. She signalled the waiter to bring another two drinks. Meeting Alex for drinks was a much better idea than sitting in Starbucks crying into a Chai Latte. The first thing she had done on leaving the apartment was to phone Alex, who had told her boss that there was a family emergency and she had to leave early.
The waiter strutted towards them, his bad boy pose studied, his dark eyes smouldering. Placing fresh drinks in front of them, he smiled seductively at the two women. â€œCan I do anything else for you ladies?â€ he asked, as he raised an eyebrow.
Dora looked at her friend, biting the inside of her mouth to keep from laughing, â€œThank you, we are completely satisfied for nowâ€. He retreated, sighing as the sound of sniggers, then giggles, then full blown hysterical laughter followed him back to the bar.