I don’t think that I have blogged about La Bise, the bitingly cold Northwind that whistles down Lake Geneva from the Alps. Probably because if La Bise is blowing, my fingers are too cold to type.

Anticyclones (whatever they are – I am copying from the fascinating Winds of The World section on WeatherOnline.co.uk) over North West or Central Europe push the air through the gap that Lac Leman was formed in, whooshing down to the end of the Lake where some silly fool decided to build Geneva. Gust can reach 7bft, which I have discovered means 60km/h. That is faster than you are allowed to drive in Geneva, I wonder if La Bise will get a ticket.

There is a saying in this area, “avec la bise, lave ta chemise”, if you have La Bise, get your washing out.

For the last couple of days going outside means wrapping up in several layers. The strength of the wind makes the lake look very blue and pretty which would be nice if we could stand still long enough to admire it.

I took some photos on Friday when I was on the school run of the Buvette that is open but too cold to frequent. Here’s hoping La Bise dies down soon. 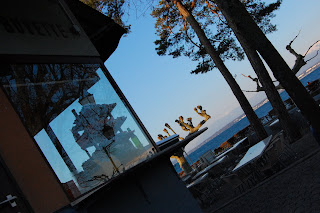