Not long ago I wrote a light-hearted post about our Nuclear Bunker. 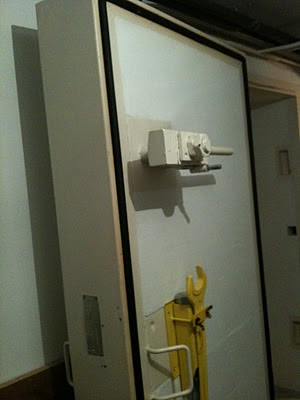 Who would have thought that not even 4 months later, I would be envied for my bunker. And not in a joking “ha, isn’t that a cool thing” kind of way.

All over Europe concerned citizens are watching the developments in Japan and asking themselves if a similar incident could happen here. The risk of an earthquake on that scale, combined with a tsunami is incredibly low but there are other scenarios – from aircraft strike, terrorist attack or human/technology fail.

As we wait for news from Japan, the German Chancellor has reacted – the announcement that the government would delay extending the lifespan of the nuclear reactors in Germany might be a desperate attempt to stop a massive election defeat later this month or it may mean the beginning of the end for nuclear power in Germany. This should actually already be happening – the red/green coalition passed a bill back in 2000 that should have seen a gradual reduction and eventual phasing out of nuclear plants in Germany. When Merkel came into power she reversed this decision.

Here in Switzerland, we rely on the nuclear energy for 40% of our electricity. The Canton of Bern voted just last month to approve the building of a new power plant in Muehleberg to replace the aging one there. In May there will be further referenda in Switzerland about further nuclear plants – presumably with a less favourable outcome for the proposal.

It does make me wonder though, how much good that will do Germany when the countries around them still rely on nuclear power. The protests in France and UK were on a much smaller scale to those in Germany. Without a European consensus the danger of nuclear fallout is still there.

Which brings us back to our nuclear bunkers. Looks like the Swiss were not so daft after all.

Originally built to protect from nuclear war, now they lurk reassuringly in our cellars in case of another Chernobyl, another Fukushima.

*UPDATE*
Since I wrote this, Chancellor Merkel has taken the decision to shut down seven of the oldest nuclear power stations. These are all power stations built before 1980 – which are no longer adequately protected against terrorist attack, according to nuclear power opponents.  The opposition is talking about desperate measures to save the Christian Democrats from an election nightmare. It will remain to be seen if this plan works and what the future for the German nuclear industry looks like.

This will very much depend on the developments in Japan over the coming hours and days.