At the school gate today, I complained to one of the locals about the cold weather we are injuring at the moment. After several weeks of balmy Spring days it was quite a shock to have to put the heating back on and dig my winter jacket out of the cellar. I was expecting an exclamation of “La Bise, La Bise!” which is normally what happens when the cold wind whistles down Lake Geneva.

Non. It is apparently the Saint de Glace, the Ice Saints. I can remember from my years in Germany that there was a rule to wait until after the Eisheiligen to put the flowers onto the balcony, and now I find these pesky Saints have followed me to Geneva.

The school mum explained that it is common for the weather to turn cold in the week before the 11th May. No one in this area plants their garden before that date. Damn. Wish I had known this before I planted my herb garden a couple of weeks ago.

When I got home, I had a look online to find an explanation for this weather phenomena. Easier said than done, as I could find no explanation in English or German. Google translate is my friend so I was able to understand the French websites.

It is all to do with the pesky Saints, Mamertus, Pancras, Servatius and Boniface whose saints days were traditionally celebrated from 11th to 14th May and brought such cold weather that farmers would fear for their crops. You will not find these days marked in many calenders these days because in the 60s the Vatican decided to assign new Saints to these days, and bump the pagan Ice Saints onto the reserve bench.

Is there a meteorological explanation for the cold weather that arrives around these dates? There is according to Wikipedia (apologies for the Wiki explanation but it was the only one that I could find)

Some explain the saying by an astronomical phenomenon coinciding with the period of 12 or May 13 of each year, the orbit of the Earth has to cross a very diffuse disk of dust in the solar system, formed both by particles trapped as residues from the formation of planets at the dawn of their existence.  For several hours, the dust is very little barrier to solar radiation.  The decrease in intensity is not observable without extremely sensitive measuring instruments, but sufficient to affect the delicate mechanisms of the meteorology of the globe.The Earth crosses again this dusty disk six months later, on November 11.

If you have made sense of that, well done.

One of the things that I miss when the warmer weather comes along is the open fire in the living room. It has not been on for weeks now. So today I will revel in the short-lived return to cold weather by shutting the shutters, lighting a fire and putting my feet up with a big mug of Cadbury’s Hot Chocolate. Bliss. 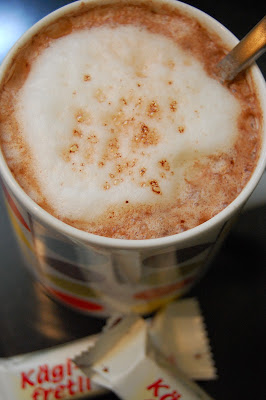