The Swiss adventures of our family began in September 2008 when we moved to a small village near Geneva.

On 22nd September the removal lorry arrived and started to pack our worldly goods. As husband was away in Munich for the week so it was just me and the kids. We said our farewells in the school and kindergarten. Leaving the kindergarten was particularly hard as it has been such a large part of our lives for the past 3 years.

The last two days in Germany were quite stressful, more than I thought they would be. We headed off to the airport for the flight to Geneva, I was sad but excited about the challenge ahead.

When we arrived in Geneva we picked up the hire car and set off for the hotel in the centre of Geneva. My first time driving here, it was dark, I had 2 grumpy kids and a huge car. Whatever possessed me to order a Skoda estate?

The next day was the big day, we would get the keys for the house. When we arrived we found the landlord and the rental agent involved in a deep discussion. We also found two workmen, busily sanding down the floors of the living/dining room, office and bedrooms. It seems that the landlord had decided to spruce the place up a bit; the whole house had been freshly painted and was looking great.

Unfortunately the workmen were not finished. The landlord asked when our furniture was arriving and I answered, “This afternoon”. Silence. “Hmm, the floors still have to be varnished, it will be Friday at the earliest” he replied. This was Wednesday.

The kids and I headed into Geneva, passing a Boulangerie on the way where we stopped to pick up a picnic, and went to the Parc la Grange where the children played for a while in the fantastic playpark.

The removal guys arrived in the afternoon and instead of moving our furniture and possessions into the house as planned, they had to put everything in the cellar and the garage. The only rooms that I could use were the cellar rooms (playroom, guestroom and utility room) and the kitchen.

The floors were not finished until Thursday afternoon so we had a day or two to dicover the area. We went back into Geneva, only a 20 minute car ride away, and had a wander along the waterfront and a trip on the little train and on the taxiboats that criss cross the lake.

On Saturday morning two handymen arrived to assemble the furniture. As they were arriving so early, I had decided to move into the guest room rather than staying another night at the hotel and having to get up at the crack of dawn. So our first night in the new house was spent 3-in-a-bed in the guest room with me piggy in the middle between the two kids. Foot in mouth syndrome for most of the night as son is a restless sleeper.

The handymen were great and had everything assembled within a few hours, but sadly the smell of the varnish on the floors was so strong that we could not stay in the rooms for longer than a few minutes unless all the windows were open.

Husband arrived that day from Munich to complete chaos, boxes everywhere, mattress on the floor of the playroom (no way was I sleeping in the same room as my little darlings again, I needed SLEEP). 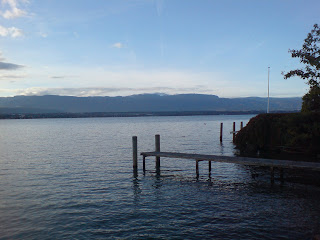 We spent our first Sunday lazing about the house, doing a bit of unpacking. In the afternoon we walked down to the lake. It was great to just sit in the sun and let the children play at the little beach with the playpark.

We could feel the stress and hassle of the last few weeks easing the longer we sat. There is a small kiosk that sells cafe au lait and croissants so it is a place to linger, watch the sailboats gliding past and just relax.

We camped out in the cellar for 4 days, eating outside on the terrace. It was a great relief when we were able to move into our new rooms. We felt like we had truly arrived.