I had an appointment to see the headteacher of the local school on the Friday after we arrived and she told me that the kids could start school right away. Not even a week after our arrival, the children started school. Son is very proud that he is now in school rather than in kindergarten, it seems to be similar to the Vorschule, preschool in Germany with a bit more emphasis on learning. It is also starts a year earlier, when the kids are 4 years old.

Son’s teacher does not speak English or German so it is a bit of a struggle sometimes, but we understand each other. She is very nice and he seems happy and content with her. There is one little girl in his class who speaks English so she is able to translate if need be. He is already starting to use the odd French word.
Daughter’s school class has lots of English speakers and her teacher speaks English so it is a bit easier to communicate with her. She has made a few friends and has been to two birthday parties already, one just last night. One of her classmates lives just down the road so they have visited each other already.
Starting this week, I will be travelling to the next village with daughter for her French class. She will go four days a week, either for a morning or an afternoon. Luckily her little friend  is going too so we can share the driving. 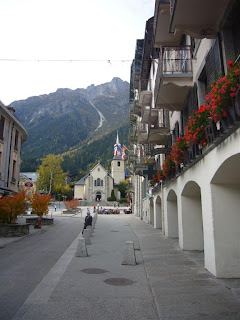 We also had our first visitor, Granny from Scotland. It was great to have her here and she helped me get organised. She had fun (I think) sorting out the kids rooms and the playroom. We had a wee trip to Chamonix Mont Blanc on the Sunday. The kids were all for buying sledges and snowsuits, but we managed to persuade them that we should wait for it to snow first.
Chamonix is a pretty little town, still a bit sleepy at the moment but starting to gear up for the winter season. We will definately go back in a couple of months, I am sure that it will be very different then. A lot of the shops and restaurants were not open, something that I think does not happen very often in winter. We treated ourselves to coffee and pancakes in a little cafe in the town, as you can see from Mum’s happy face, they were delicious.
Looking back at the photos, I have just realised that we did a lot these first weeks. We also did a tour of Geneva, that husband’s company organised. They have also organised a Halloween party, Trunk or Treat today, so I will stop posting now and go and get organised for that. Don’t ask me what a Trunk or Treat party is, something to do with sweets and cars, so it will be right up son’s alley! As Swiss as Chocolate and Mountains – The Swiss Nuclear Bunkers