Or do the Swiss celebrate Halloween?

Well, I don’t know about the rest of Switzerland but here in our village we certainly do. In typical Swiss fashion a list went around the school this week to ask if we were going trick or treating or if we would prefer to stay at home and hand out the goodies. A few days later another note was sent to us, listing the children who were going Trick or Treating and which houses were awaiting a visit.

We decided to stay home this year so I stocked up on sweets, the kids got into their costumes, the pumpkins were carved and lit, then we sat and waited for the doorbell to ring.

We did not have to wait for long, within the next hour and a half we had around 60 guisers, as we call them in Scotland, Trick or Treaters for the Americans. They do not sing, just shout TRICK OR TREAT, grab some candy and off they go. It was great fun and although la petite fille has said that she would like to go out next year, son has decided that he would rather stay home. He loved putting sweets into the childrens’ bags. 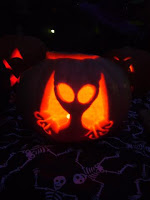 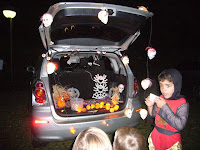 This evening, as I mentioned earlier, we were invited to a Trunk or Treat party at husband’s office. We were unsure of what to expect, we had been told to bring sweets for the trick or treating, pumpkins for a best pumpkin competition and decorations for the car. In typical European fashion, I took some pumpkins and a couple of squashes as decorations, only to be completely outshined by the American colleagues with their halloween lights, fake ghosts and cobwebs. The winning alien pumpkin was fabulous, and certainly deserved to win. There was some controversy over the second pumpkin as it was open at the bottom which many felt was cheating. 🙂

At one point the older girls started telling the kids that they should get together for the Mummy Rap. I was intrigued, thinking that they had rehearsed a song and had to laugh when I realised that it was a Mummy WRAP, the kids were wrapped in loo roll to resemble mummies. Son thought this was great fun, although he did say that he would like to do the game again at home. I will be hiding the loo roll to save us from an Andrex Puppy Situation 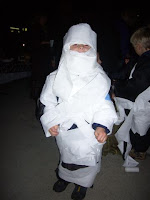