Want to come into my cellar and see my nuclear bunker? That’s quite some chat-up line, right? Not so much here, since the Swiss nuclear bunker is just a part of life here, and everyone has one. 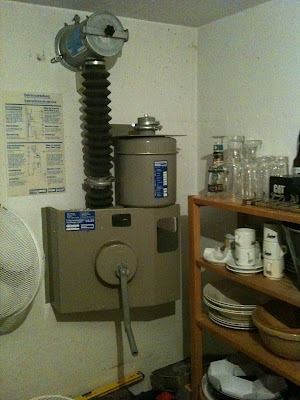 We live in a small detatched house near to Geneva and the Swiss/French border and in the event of a nuclear incident, we can serenely skip downstairs and enter our safe little Swiss nuclear bunker. Up until recently every house built in Switzerland had to have a bunker; a communal one for apartments and a individual family bunker for houses. Anyone who did not have a bunker – in older houses, or where it was practical or possible to build – had to prove that they had bought a “space” in a communal bunker. Kind of a Atomic Timeshare, if you will.

Only problem with our Bunker Plan is that there is not much food in the bunker – although there was an offer on De Cecco pasta recently in Coop so there is that. I do have an electric stove, bought for our party where we served mulled wine, so we could even cook the pasta. If we had water. Ah. A flaw in The Bunker Plan.

We mainly use the room as a store, like most other Swiss nationals and guest. Wine, old photos, wine, summer clothes, wine, flour, wine, suitcases, wine, Christmas decorations, wine.. you get the picture.

Recently, my husband got fed up at the state of the bunker, as we had not really unpacked all our boxes from when we moved – it has only been 2 years after all – and we had to climb over boxes to reach anything that we needed.

Typically German, he had A Plan.

It involved taking everything out of the bunker, laying it out in the playroom, sorting, binning and returning what was left to the bunker. Which meant that our playroom looked like a bomb had hit it.

Soon, I was settled down on the children’s Ikea chair and was sorting through boxes and boxes and boxes of stuff, most of it junk. I lost count of how many bin bags we filled, but it went into high double figures.

The problem with sorting through old boxes, is that you invariably get distracted by sentimental memories attached to the most unlikely objects.

And yes, that is an original piece of DDR toilet paper. We were in Germany with the Venture Scouts in 1990, first in Koblenz/Bonn area then on a trip to the former East – to Leipzig, Dresden and Berlin. The atmosphere in Germany that first year after the “Wende” – the fall of the Berlin Wall – was electric. You could feel the joy and excitement in the air. We spent a few days in Berlin, where we saw this concert.

Little did I know that just seven years later, I would be slipping into a pair of cream satin pumps and an organdy silk dress to walk down the aisle to marry my German husband.

Two years after the birth of our daughter we were blessed with another child, but as is often the case with second children, I forgot to take a photo of the things that belonged to our son. Sorry, my lad.

All this reminiscing and cooing over baby-gros and meant that it took much longer to tidy the bunker but it was fun. 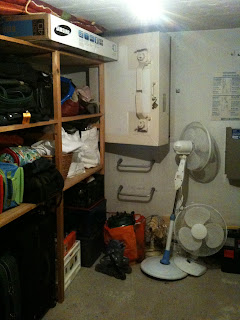 We are due an inspection of the bunker soon, so it will be great not to have to haul everything out so that the guys can get in to the air filter. Last year, they had to clamber over boxes and bags of stuff. Actually, every year since we moved in it has been an It’s A Knockout Engineer Challenge.

So, in the unlikely event of a nuclear strike, we shall be fine. I think we could fit a few more in, if anyone wants to pop over.

We could have an Atomic Party.

Don’t forget to bring some Pringles and a bottle of Hooch. Ingredients for Baking in Switzerland – Where to buy Baking Powder, Soda etc