The Swiss have a unique voting system called direct (or half direct) democracy. This means that basically any Swiss citizen can propose a change to a law. Around four times a year votes are cast on local and national level – this can be anything from a major change in the constitution to a local “minor” issue.

Today the Swiss voted on several issues. We were aware that a vote was imminent as there were placards up around the town. This poster caught my eye: 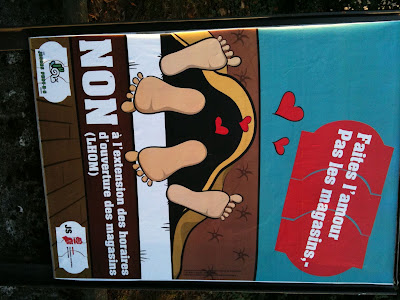 The Genevoise were voting today on the issue of longer store opening hours. This poster exhorts citizens to vote NON otherwise the poor sales assistants will have less time for l’amour.

Slightly less amusing were the other posters seen in our village 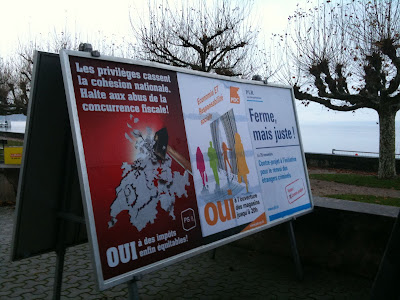 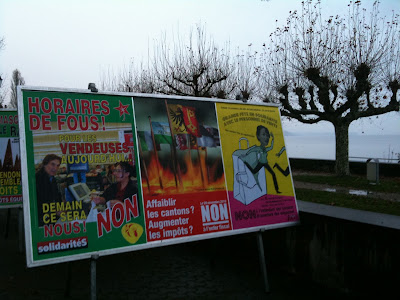 These dealt with the shop opening hours and the issue of fair taxes in Switzerland.  La Justice Fiscale deals with practice of allowing wealthy foreigners to pay less taxes depending on which canton they live in. This would introduce a minimum tax level across all cantons.
Both of these initiatives failed to achieve the necessary votes to make them law.
Sadly, the initiative that was successful is one that will likely damage the standing of the Swiss worldwide. 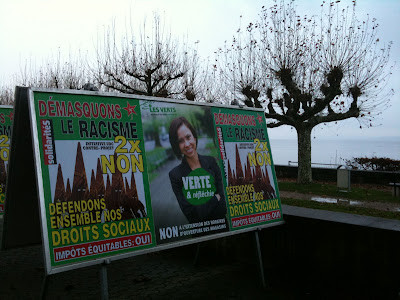 The Swiss today voted to allow foreign criminals to be thrown out of the country. The current list of offenders is those convicted of serious crimes such as murder, rape, sexual abuse, armed burglary but this list can at any time be amended and other crimes added to it.It also included non-violent crimes such as drug dealing and social security abuse. Judges in Switzerland already have the power to expel convicted criminals but this move goes further – making expulsion automatic.

The proposal was highly critisised by human rights groups. Amnesty International said that the approval of the initiative represented a “dark day for human rights in Switzerland”. The move reminds one of the vote last year to stop the building of minarets in Switzerland.

A majority of 52.9% voted for the proposal throughout Switzerland, with the French speaking Cantons around Geneva voting against it.

We have lived in Geneva for over two years and have seen first hand the way in which foreigners are treated. As caucasian English speakers, we have never had any problems but I have often seen black people – particularly young black men – stopped by the police for an ID check.

What a shame that the Swiss put more value on tax and shopping hours than on human rights.