It is one of those moments when time stays still. You look up from what you are doing and notice that your child is not there. He was there just a minute ago, you look around wondering where he is. He cannot be far.

Maybe he is a bolter, an escapologist and you are used to this. Maybe this is the first time that he has done this. Either way, your heart starts beating faster as you search for his familiar face. You try to remember what he was wearing – was it the red or the blue tshirt? How can you not recall this?

Shouting his name you start to walk faster and faster, asking strangers if they have seen a little boy, about this high, with blonde hair.

This was me last summer. We had gone to the beach in south of France. In the moments that it had taken to take the towels out of the beach bag, shake them and lay them on the sandy beach, he had shucked off his tshirt, slipped out of his flipflops and headed off down the beach. 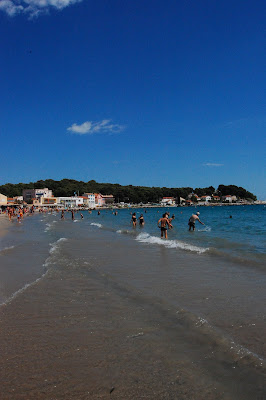 “Wait, you need suncream”, I shouted after him, bending to search in the voluminous beach bag. When I straightened, he was gone. I stood with the suncream in my hand, shading my eyes with my other hand as I looked to see where he was. Gone. Disappeared.

“Oh, for goodness sake. Where did he go?”, I asked  my husband. At first we were annoyed, then we grew more concerned. It had been a couple of minutes, we searched back and forward across the beach then I went to the lifeguards to ask for help. They were great. What was he wearing, how old, what did he look like.

A tannoy announcement alerted others to the missing child saga taking place. The group of elderly French women next to us on the beach looked concerned. We searched. The lifeguards searched. He was gone.

He was not one to be silly at the beach. We live near the lake, he knows not to go in alone, not to go too deep, not to go without swimming aids. Could he have forgotten?

Trying not to think about other scenarios – the ones that make every parents’ heart quake – we searched again. I clutched my daughter to me – the lifeguards told me to stay at our blanket in case he wandered back.

Then a shout. I looked up and saw the lifeguard coming towards me, my son running ahead of him. He was wearing the stripy swimming trunks, not the ones with fish on them as I had described to the lifeguard. He looked bemused by the fuss, stood silently while I gathered him in my arms. My sobs embarrassed him but I could not stop myself. Drawing back, I asked, “Where were you. We were worried?”, that timeless query of a million mothers.

He was making sandcastles,  just down the beach with some French children. How we did not see him when we went past, I will never know. Perhaps because we were looking for a single child, not a group.

The French grandmothers next to us smiled, relieved to see the family reunited. I sat on the sand, my hands still shaking, my heart beat slowly returning to normal as I wondered if it were to early for a G&T.

When we got home I ordered some tattoos from PleaseCallMum.com with my mobile phone number on it. For a while he wore one when we went out.

We also agreed on a password as we recognised that part of the problem was that he would say, “I am going to ….” and not wait to see if I had heard before bombing off. The password was not just “yes” or “ok” as sometimes I would say that without really listening to what he was saying – doesn’t every mum do this sometimes? – but a silly word such as “Banana Cake”.

I also had to learn to be more exact when telling him what we were going to do. If I said, “We will finish eating then go to the loo”, he would do exactly that. Saying, “When we have all finished eating, we will go together to the loo, don’t go without me”, meant that he would wait for me to accompany him.

Over the last year, he has stopped disappearing and I am able to relax more and enjoy days out. At last.

Ban TV for Children Under Three Years Old? Not In This House